Emojis are a new, modern, and global language. Everyone uses them in social media, chats, text messages, and even during business arrangements. Just like memes, emojis in social media marketing and in everyday communication are a phenomenon that quickly entered our lives and became a staple of written expression.

The word emoji comes from the Japanese “e” (picture) and “moji” (character). It was first used in 1999, but its burst in popularity began in the 2010s after they were added to multiple mobile operating systems.

Slowly, but surely, emojis have become a must-have in all sorts of conversations, especially on social media.

Today, we’re going to find out how to use them to get the most out of your social media marketing strategies and increase engagement with your online audience. 😉

Why Should You Use Emojis In Social Media Marketing?

Before we get into the question of how to properly use emojis in social media, let’s understand why you should use them.

First, emojis have universal meaning, anyone around the world can understand them. Above that, the use of emojis makes your brand appear more personal and relatable.

In a nutshell, using emojis can help your brand with: 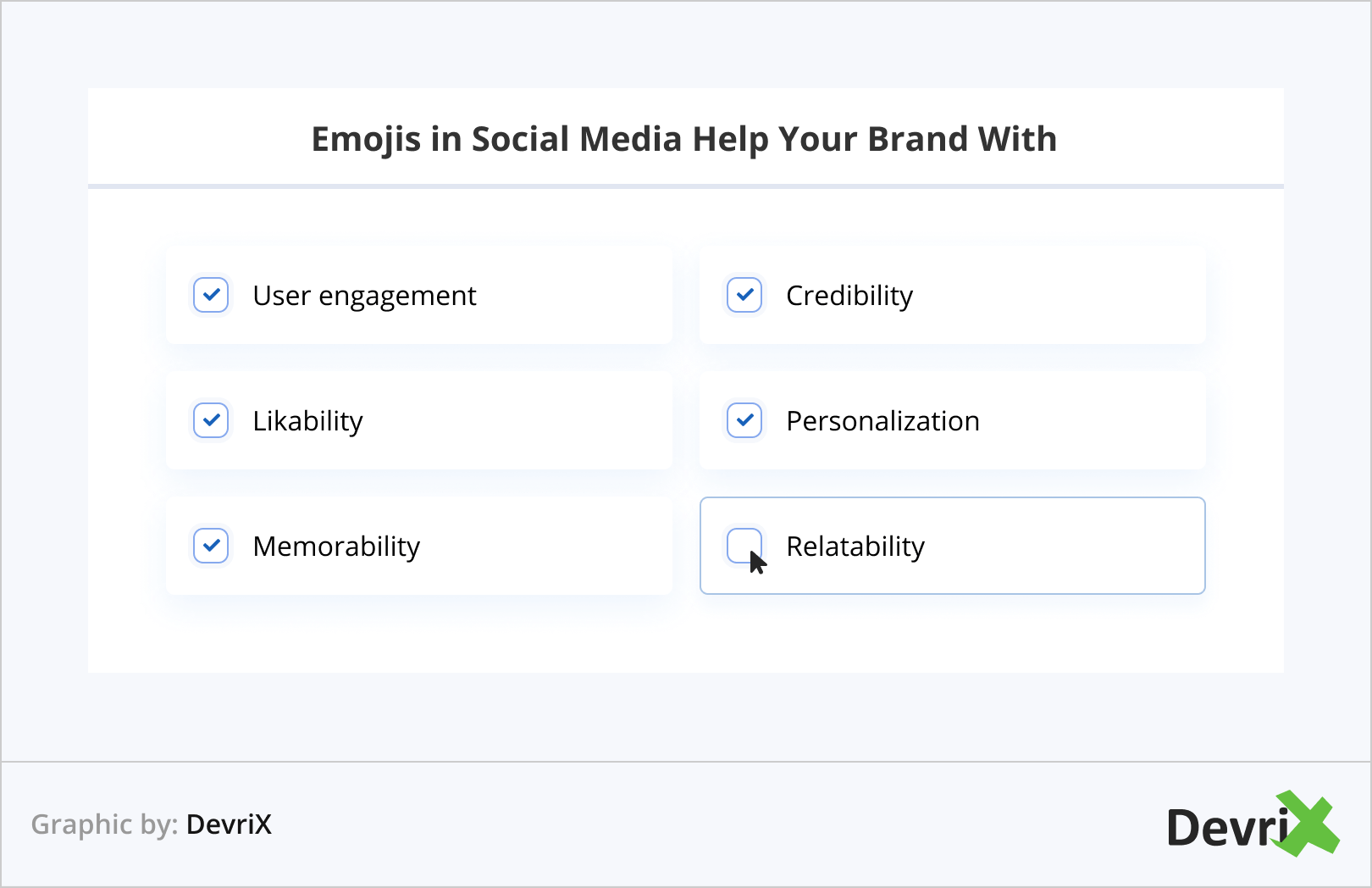 What Are the Most Popular Emojis?

There are currently over 3,600 existing emojis, so it’s only natural that some of them are more popular than others. Of course, their popularity varies depending on the social platform.

Thanks to the dedicated website Emojipedia, we can review the most popular emojis by social media and device type.

Most Popular Emojis on iOS

As you can see, there are differences across social platforms and devices. Still, it’s visible that some emojis are just more popular than others.

Perhaps these differences are due to the fact that some emojis have a universal meaning, while others are subject to interpretation, and could have a different meaning depending on the person who’s using them.

For instance, we all have that one friend who always sends an emoji that has a unique meaning.

It’s time to look at a few tips and tricks on how to increase engagement on social media with the clever use of emojis.

Whenever you use emojis in your social media marketing efforts, remember to be natural. Avoid using emojis that are vague or feel forced, as they will have a negative effect on your posts. Your aim is to come of natural and invoke feelings of positivity.

Basically, think of how you use emojis in everyday conversations. You should apply the same logic in business – if you’re spending too much time thinking about which emojis to include in your copy, it might be better to go without any.

2. Avoid Too Many Emojis

Hey, ✋💓💀😏😊🍏💯😜. What do you think about this combination? It doesn’t look right, does it? Moreover, such a combo of random emojis might give your audience a headache, and they may avoid visiting your page, at least for a while, or even unlike it all together.

To clarify, don’t overuse emojis. The general rule of thumb is to have no more than four emojis per post.

3. Make Sure of the Meaning

It’s okay to be confused from time to time with so many emojis out there. Rather than using an emoji out of context, and making users wonder what you wanted to express, check its meaning out online.

Using the wrong emoji can actually do more harm than good, so take a few minutes to do some research and save yourself any future embarrassment.

Emojis are fun, but they should also have a meaningful impact. Always ask yourself if using a particular emoji will emphasize your message. For example, if you want to convey a fresh summer vibe to a post with clothes you have in store, it would be a good idea to include purposeful emojis like 🌴or 🌞.

As it is with most marketing activities, creativity is your friend. Nothing can beat a clever, creative idea that hasn’t already been overused. This includes the possibility of creating your own emojis. Yes, it can be done, the easiest way being with the help of dedicated online tools.

This is an awesome way to brand your emojis and make people associate your brand with coolness.

Know your audience and what they like. It’s as simple as that. In case, you’ve determined your audience is not particularly keen on emojis, there’s no point in persisting. Of course, you can always try experimenting with certain emojis to see, if there’s any positive or negative outcome.

Still, it’s better to stay in line with your business type, and not take a bizarre approach. If you are an eCommerce website, it would be best to stick to the shopping cart emoji, for instance.

Emojis may not be words, but they can still hurt. Always try your best to be as sensitive as possible, and double-check your posts before you publish them.

Do you remember Hillary Clinton’s Twitter post from several years ago, when she embarrassed and presented herself as ignorant and senseless?

How does your student loan debt make you feel?
Tell us in 3 emojis or less.

In a nutshell, don’t try to make a serious situation humorous, when it turns out that only you find the joke funny. This is something that can totally turn your audience against you. And generally, when speaking about a serious topic, emojis are to be avoided on social media. 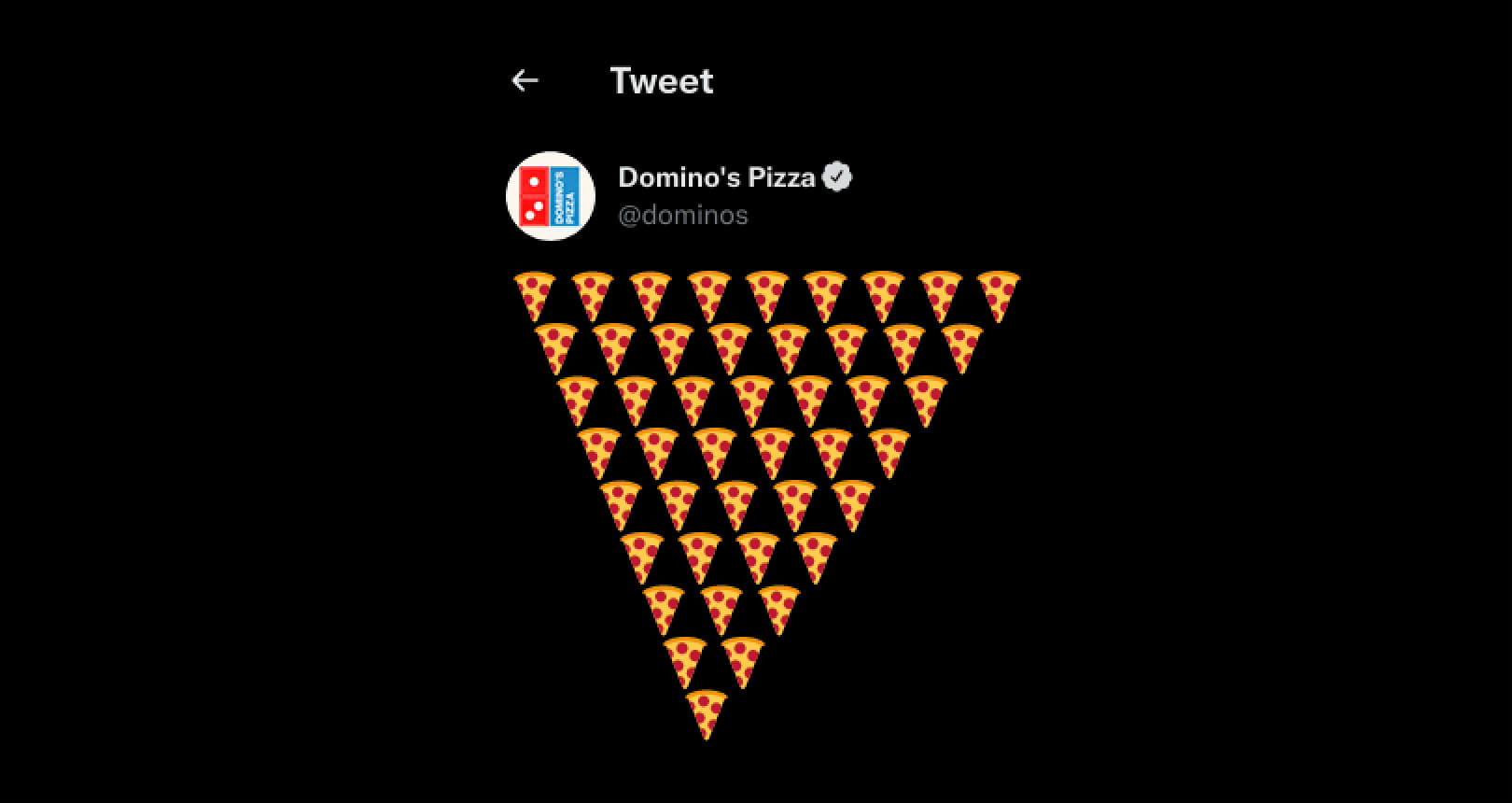 Behold! Domino’s Pizza introduced their new tweet-to-order feature with a series of pizza emoji tweets. From thereon, their customers were able to order pizza by typing an emoji.

WWF launched their endangered species campaign on Twitter. They came up with the awesome idea to introduce their own emojis, and the entire campaign was named after that – #EndangeredEmoji 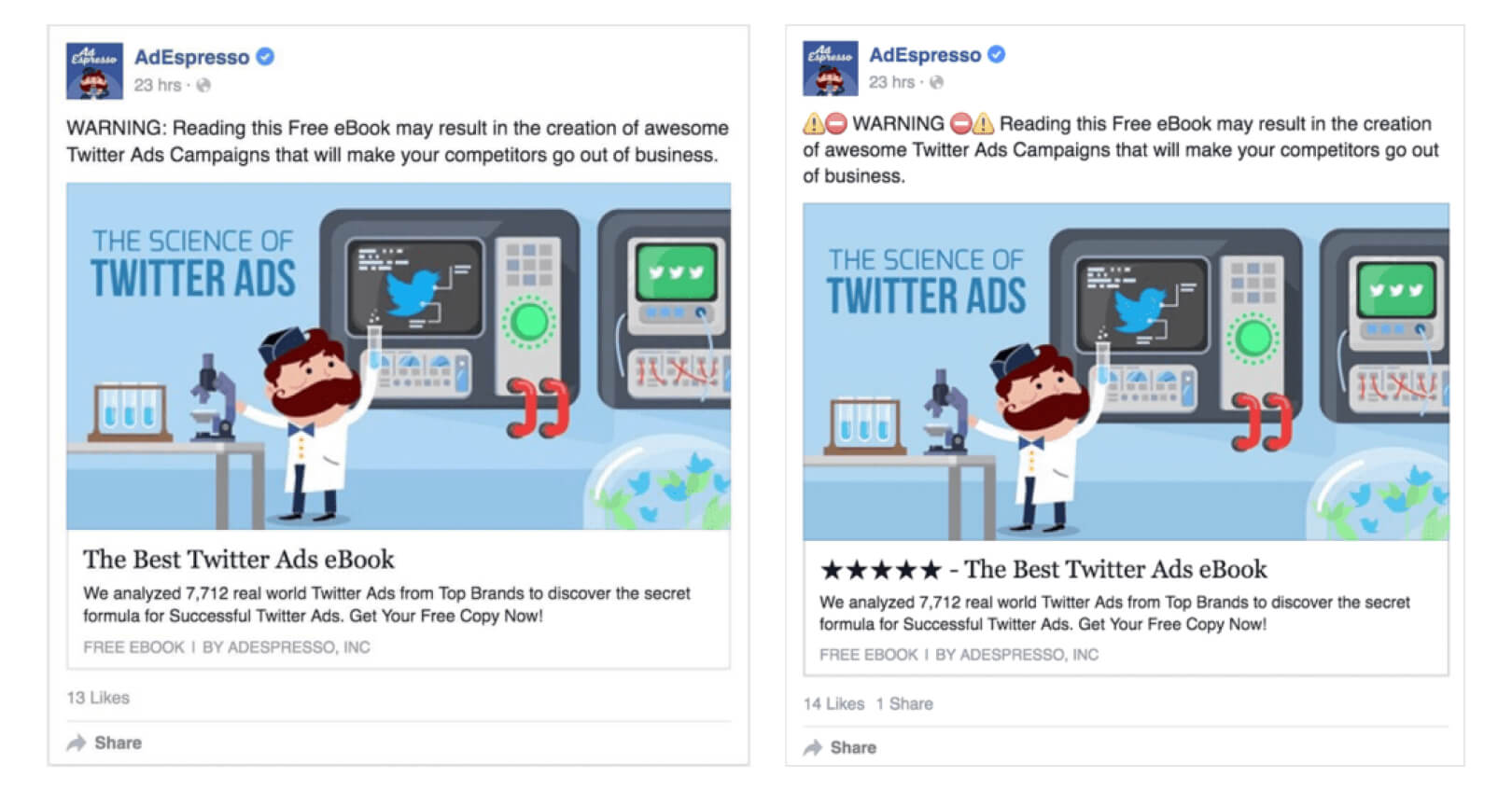 The AdEspresso team decided to A/B test the power of emojis in the Facebook ad campaign.

As a result of the experiment, the ad with emojis got a 12% higher click-through rate, however, the cost-per-click of the ad without the emojis was lower ($0.639 vs. $0.720). The takeaway point from the test is that emojis don’t always work well with Facebook ads.

Emojis in social media marketing can really help your brand get that extra exposure and increase engagement among your audience.

Like them or not, emojis are here to stay, so think of ways you can incorporate them into your social media strategy.

Of course, you always use them when it makes sense and be careful not to overdo it or be insensitive.

Building a social media strategy requires dedication and ongoing commitment. We can unify our content marketing efforts with social media marketing chops by handling your channels on social media.