For almost a century and a half, engineers have called small flaws in machines “bugs”. Nowadays, “bugs” is used for both hardware and software issues in computers and gadgets. Computer bugs have been around for quite a lot of time and with them also came the bug reports.

The first ever computer bug report was documented on September 9th, 1947, by Grace Murray Hopper. She reported that an actual moth was stuck between the relay contacts in the Harvard Mark II computer. The bug was taped to the computer log book.

More on the first bug report can be found here.

Since then, bug reports have been an important part of the whole QA process. They remain as the main tool for reporting faults in programming codes.

This article covers what needs to be included in a good bug report. There will also be a couple of examples for good and bad bug reports, including a short analysis of each one.

What Is a Bug Report?

In website development, a bug report is the main tool used to indicate that a certain piece of code isn’t performing as expected. There are loads of different examples of “bugs” out there, but to name a few:

The main purpose of a bug report is to allow the development team to reproduce the issue which has been reported by the QA team. It’s important to have all the required information to make the process of debugging and fixing easy.

Bug reports are used not only to report issues, but also to suggest new features and improvements. As such, most of the guidelines on what a good bug report should include would also apply for suggestions.

Related Article: How to Develop a Quality Assurance Plan for Your WordPress Website

What Should a Bug Report Include? 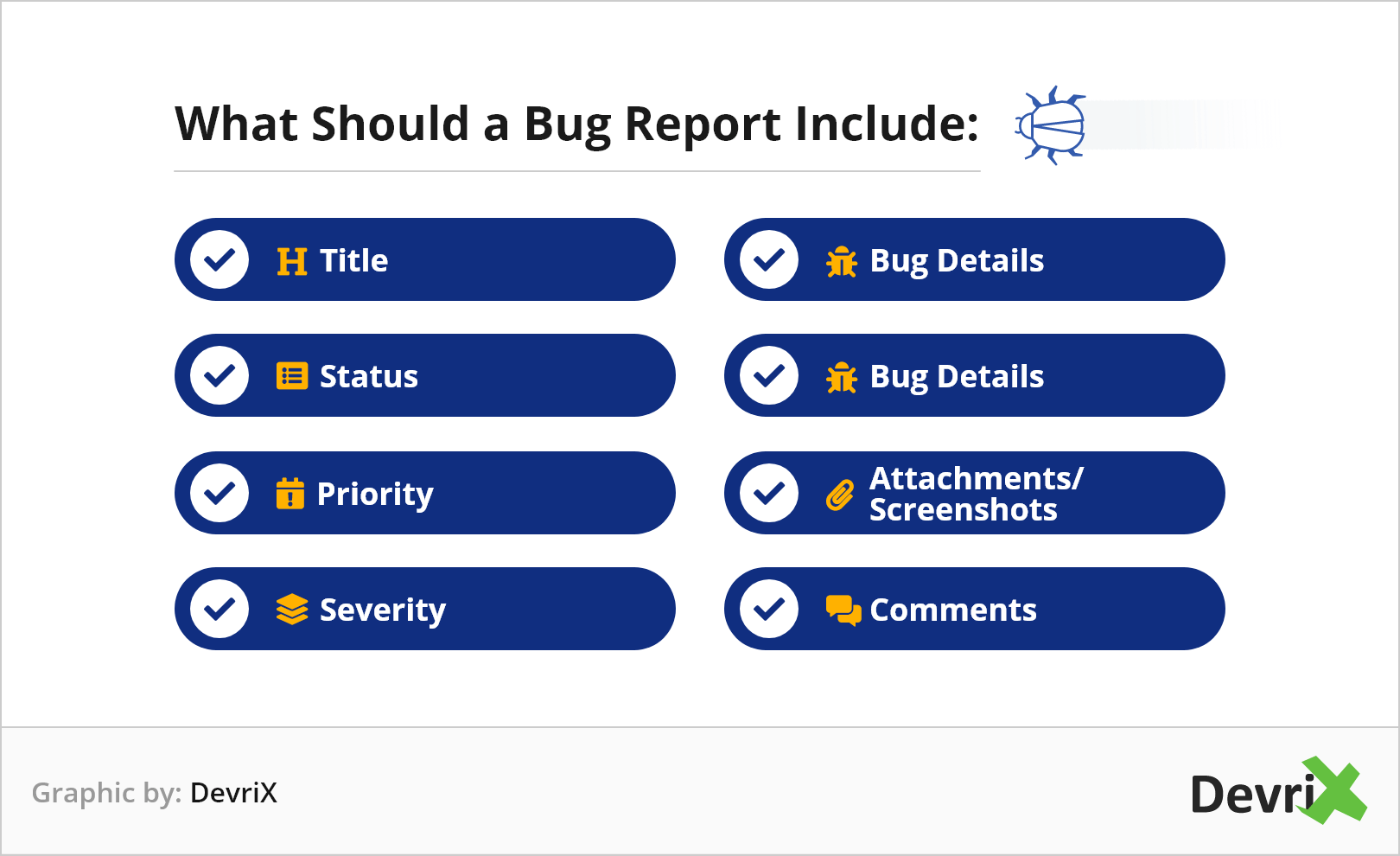 Related resources: Quality assurance work is an essential part of working on every website. That’s why going through the lengthy and detailed phase of testing, fixing bugs and regressions and stabilizing the platform for the launch is related to how much the website will cost.

While running QA tests, experienced testers usually come up with ideas for improvements to the project. Likewise, Project Owners and Project managers need to receive client requests (for features, fixes, improvements) which need to be shared with the development team.

Unlike Bug Reports, the aim of the Suggestions and New Feature tasks is to explain client requests or improvement ideas which have the potential to improve the project (like the implementation of a performance update, adding a feature which would allow for better interaction with the users, etc).

In both cases it’s important to provide a clear description about the feature which needs to be implemented:

Disclaimer: The following examples are taken from a QA course project which the author took part in. The goal is to analyze the mistakes that have been made in the reports and how they can be avoided. 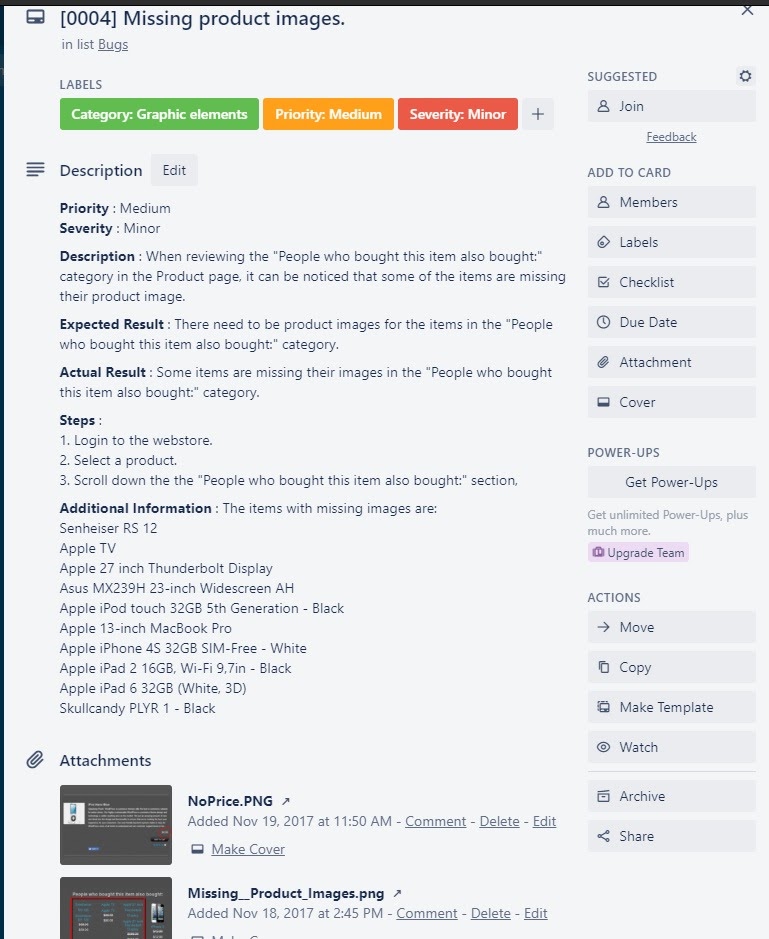 Here is an example of a well-written bug report. It includes all the attributes discussed above.

However, there’s one problem with it – its title doesn’t provide an accurate idea about the reported issue. The missing product image could be anywhere on the tested web store.

A better title is “Missing product images in the “People who bought this item also bought” section”. This way the development team would have an idea what the report is about from the title itself. 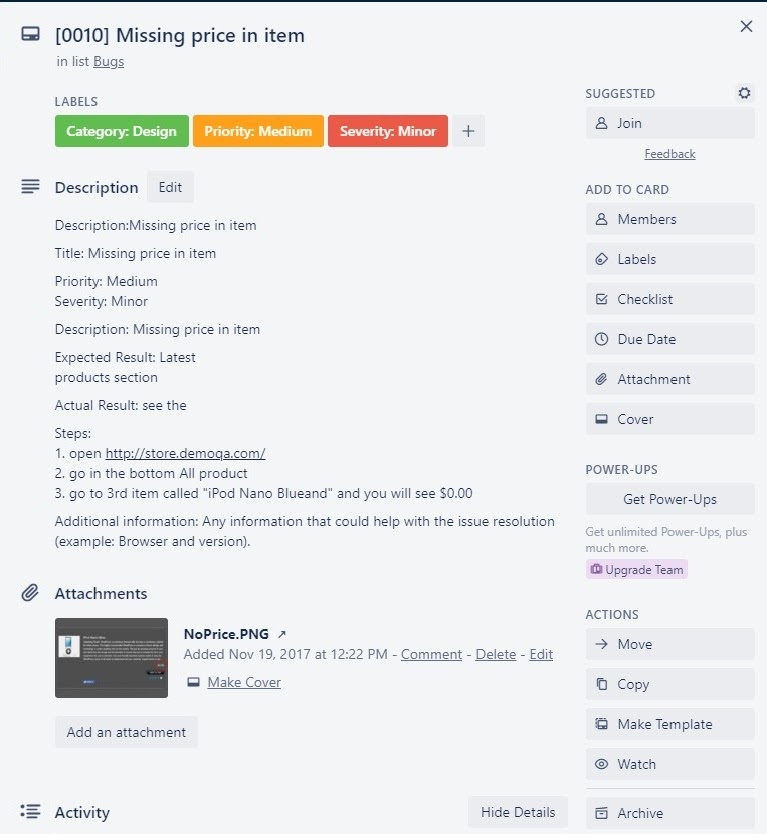 This is an example of an overall poorly written bug report. The main issues with this example are:

Poorly written bug reports force the development team to spend unnecessary time figuring out what the problem is and where the reported issue is located. The team often must resort to asking the QA Specialist who reported the bug to clarify any missing details… 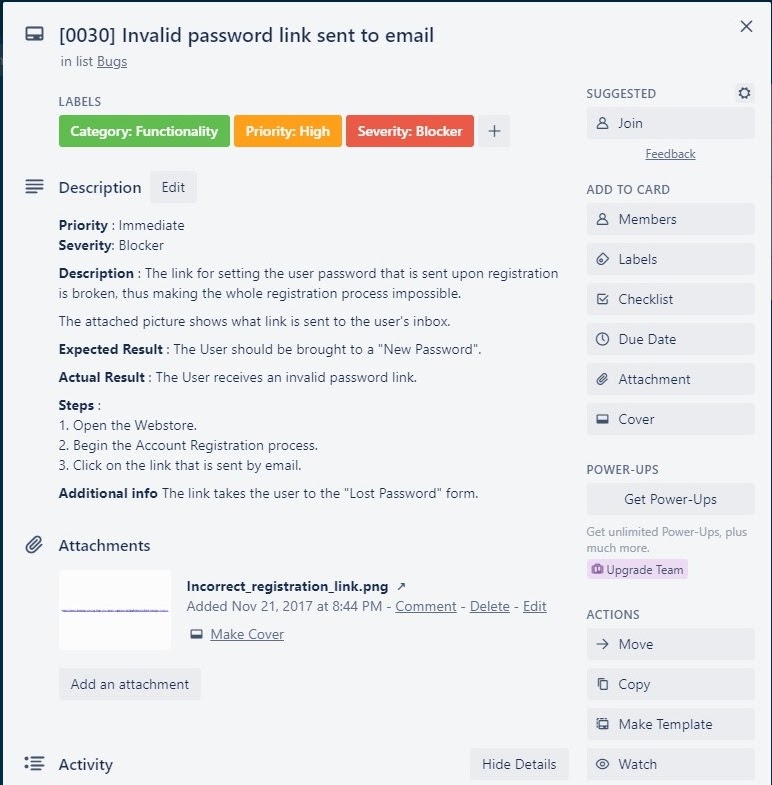 This is a good example of a properly written bug report. It gives the development team a clear idea where the issue is and how it can be reproduced.

A slight problem with this report is that the reported issue doesn’t actually stop the testing process, meaning that the assigned severity and priority are incorrect. If the QA specialist investigated the issue better, they would have noticed that a workaround exists.

That workaround would have allowed for the Account Registration process to be completed. It’s of great importance to investigate an issue before it’s reported so that no important details are excluded and that the correct severity and priority can be assigned.

A well-written bug report by the QAs is instrumental in order for the development team to understand what the issue is and how it is supposed to be solved. For this to happen, always remember the following:

Quality Assurance at DevriX
Martin has been on the forefront of breaking code up and hitting projects' vulnerabilities for over 5 years now. He enjoys driving developers crazy because he strives for perfection and loves details. Hе is also a passionate gamer, a music addict and a proud cat's dad.