With this post, we aim to bring to you all the important facts about social media

Social media has become an integral part of life for millions of us around the world. Facebook has recently completed ten years which is pretty long in the tech world. It all started as fun and interesting but soon got more business-like. You can imagine it like a frat house party that was fun and all until the cops arrived and stopped the party.

Now that most social media businesses are worth billions of dollars, things got serious. The politicians started intervening as well, as they pushed for privacy laws etc. The lawyers came next and everything got serious. People have to think twice before posting stuff online as they do not want to be in the center of a controversy. What you say on social media these days can even get you sued – Serious, no?

People tend to be uncomfortable and hesitant when there are no rules involved. They start asking for directions. Some of us try to be experimental but most people do not come in that domain.

Some of the questions raised were how many tweets per day? Can my page serve as a website? Should there be a blog?

These questions meant that social media needed to be more accountable and must have guidelines for people to follow. Then you may ask if having rules is bad?

Not necessarily! With social media expanding so rapidly, the return of investment question becomes inevitable. It is not just about engagement now rather changing these engagements into leads. That does, however, make social media a tool for business and makes it a bit boring as we label generally it as mean of communication.

New Kids on the Block

Just when you thought the fun was over, there came new cool kids on the block. This year saw some new social media that will take you back to the young days of Facebook or Twitter. Meerkat and Periscope brought live video streaming to the social media scene.

Periscope lets you stream live videos and this new thing called Blab lets you chat on video with multiple users. We saw four social media experts having some beers and chatting with over 20 people who were asking questions about Blab. Will Blab become the next big thing? The whole global connectedness is still inebriating.

When any new social media comes to the playground many questions are raised. The fun part stops here and serious Q&A begins.

Some questions that may be raised by users:

To better grasp the need of certain social media, the Pareto principle should be applied.

If only 20% of the efforts result in 80% achievement, then the distraction from new shiny things is similar to playing with a wheel. It seems fun but is not productive in the slightest. However, in most cases, you will see benefits from the marketing perspective and that is a desirable result.

Looking at the Growth rates

When social media started, the growth rates were of astronomical proportions. Social media saw growth that was never seen in the web era before. Facebook, Twitter and Instagram took the world by storm. It would not be wrong to say they revolutionized the world of internet altogether; such was their growth.

This growth rate is now slowing down as compared to its initial years. Most of the growth now springs from the spread of smart phones into the developing world. It is helping bring more people on board as it becomes a primary internet device for many.

In accessing the big picture, there are some important facts about social media that need your attention. These will help break everything down for you.

Facebook remains the dominant social media outlet and has its presence and command over a lot of layers. Just the size of its users and the expenditure on advertisement is an overwhelming proof. 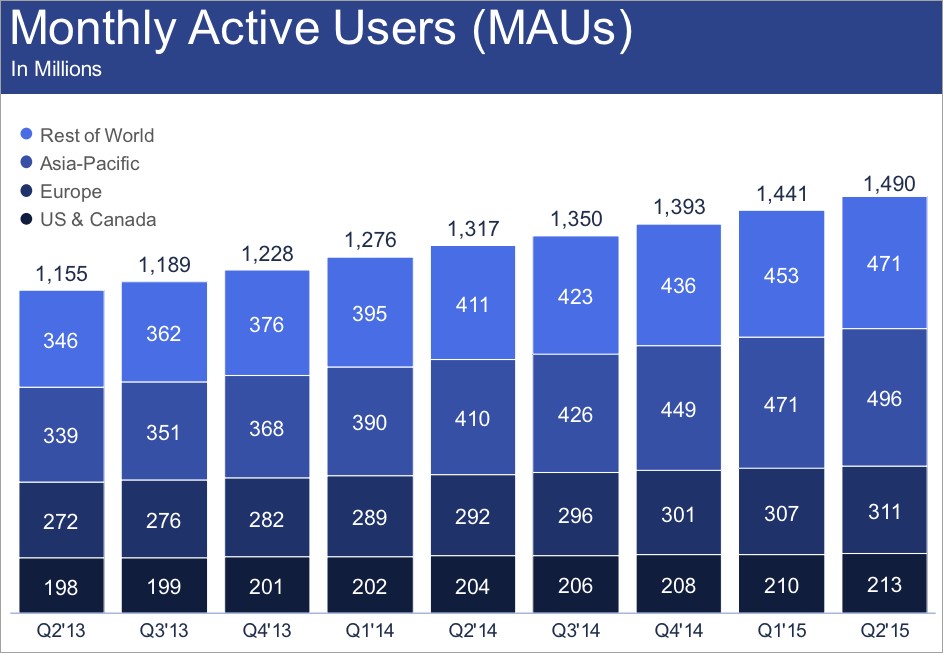 Some of you might not know this but twitter became a social sensation by accident. Yes, it was never meant to be so called ‘social.’ It was made for serving as a private messaging service for a podcast company. But we are all familiar with the success it has had.

Another less known fact is that if you send out more tweets you get more followers. (You’re Welcome!)

YouTube no wonder is one of the most famous social media and it is evident from the following facts:

LinkedIn you can say was a little late to the party. It is a website for organizations and potential employers. It has since become very popular and is used all over the world. They are trying out a new tool LinkedIn Elevate to help organizations share their content via their employees.

Instagram is again one of the fastest growing social network. It is a social media outlet for sharing pictures. So the visual aspect makes it even more popular among people who are interested in seeing pictures. It has lately started advertising as well bringing in more revenues.

It is not limited to photos only; you can even upload videos up to 15 seconds long. Initially it only allowed rectangular images so you had to crop your image but now that limitation has been removed making it all the more flexible.

Here are some facts about Instagram you ought to know.

Snapchat as the name suggest is an app that allows user to communicate through pictures. User can upload short videos and images that last only for 24 hours. The key feature of Snapchat that helped make it popular was its private image chat. Users send an image to another user and the image is deleted instantly after the receiver has viewed it. This novel idea drove millions of people to get on Snapchat. 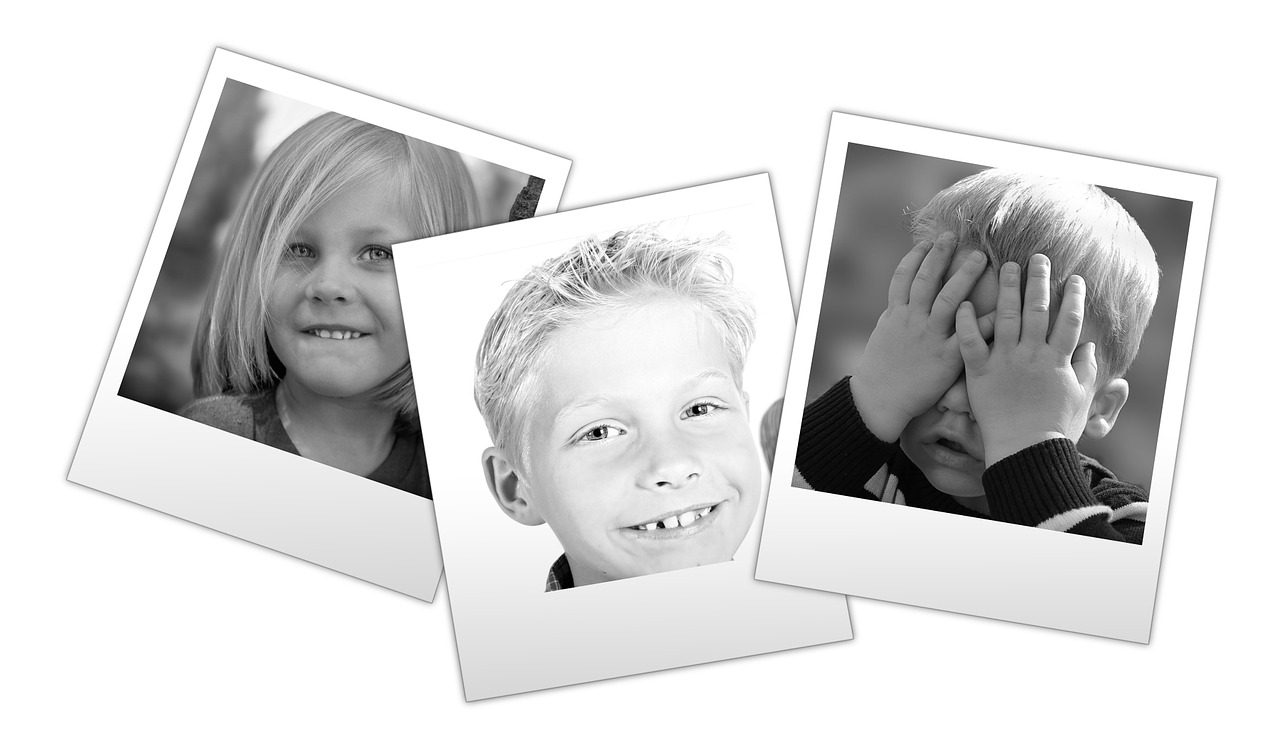 Created by Stanford graduates, it was bought by Facebook for $1 billion. Snapchat offers a lot of fun ways to edit your photos and videos. Its many filters have kept the fun element alive.

Credited as the female dominant social network, Pinterest has continued to be a favorite among the ladies. The images cover fashion, recipes and household images.

For those who do not know, Pins are visual bookmarks which link the images to the site they came from. Boards are where you place the pins. You can make a board for anything, from recipes to restaurants to home remedies.

The newer social media platforms are emerging with innovative technologies and faster data networks. These are more video centric and take the whole idea of engagement to the next level. Since these are video streaming apps, they leave behind the speed constraints and aim to stream smooth videos.

It must be mentioned that these rather nascent apps are bringing the fun vibe back. 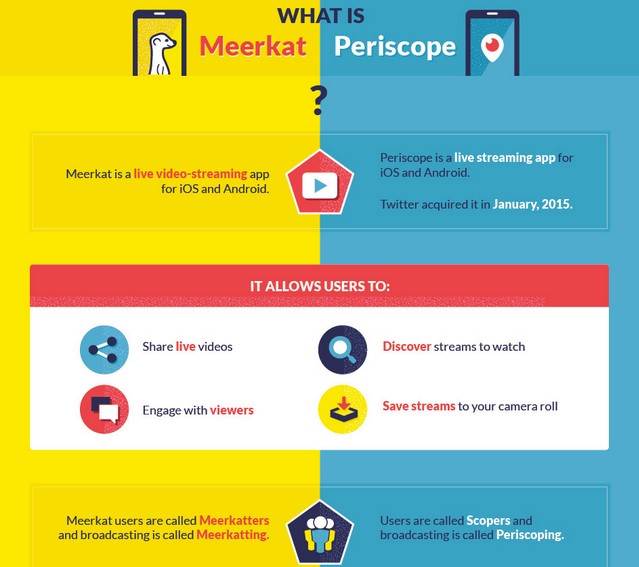 User can broadcast live videos from their phones. Launched in 2012, it did not become popular until March 2015, when it broke out on the social scene at SXSW (South by South West), a film, media and music festival held every year in Austin, TX.

Due to its non-disclosure, it has been hard to get more insight about their users, revenues etc. In May 2015, it was estimated that it has 2 million users. This seems a humble number compared with the likes of Facebook and Twitter. However, it is projected to grow quickly as it expands its reach globally.

Another video broadcasting app, it Twitter’s answer to Meerkat. After its launch, Meerkat’s access to the API and service was cut off, which affected its growth.

Here are few facts about this fun app.

This is the youngest app covered in this article. It was launched last April. It allows up to 4 users to broadcast videos that can be watched by other people. It is more like Google Plus Hangouts on mobile. You can even record it for later use, and it feels like a mobile stadium. Few people taking the stage and audience giving feedback and asking questions via messages on the side column.

Blab has still got a long way to go. It is currently only available for iPhone. It is becoming increasingly popular among bloggers and is very fun to use and as mentioned before it focuses highly on engagement.

Interesting Fact: Blab was launched by the founders of Bebo. Bebo was a social networking outlet initiated back in the early days of social media in 2005 by Micheal and Xochi Birch and was bought by AOL in 2008 for $850 million after having reached over 45 million users. It was bought back by the founders gain for $1 million in 2013 after it failed.

What do these facts about social media mean?

The facts about social media listed above for some of the most ubiquitous social media tell one thing for sure, that social media is inescapable. With smart phones becoming ever more common, they are reinforcing the reach of social media. Something that started as an experiment has become a billion-dollar industry. It has changed the dynamics of communication and marketing both at consumer and business layers.

Some might argue that social media is just a fad. The reality though, is pretty much clear, that social media is here to stay. And as new innovative and interesting platforms originate, the legacy social media companies need to get their gears into motion about keeping the interest of the people alive as falling from the stairs is much faster than climbing them in the social media world.