Web design and web development are quite tricky terms. Many site owners tend to confuse them and don’t know what kind of specialist they need for their website.

In this article, we are going to explain in more details what’s the difference between web designers and web developers, so online business owners can have a better understanding of both professions.

Let’s start with a short preview of both terms – web developer and web designer.

A web designer is often referred to two possible positions – a designer or a front-end developer.

The designer does visuals only and doesn’t code. Designers use programs like Sketch, Adobe XD, Photoshops, etc. and their skill set is focused on user experience (UX) and user interface (UI).

A front-end developer, considered as a web designer, is the one who writes only HTML or CSS and has at least basic knowledge of JavaScript (JS). Part of the skill set is good knowledge of the best UX and UI practices.

The Path to Becoming a Good Web Designer

A web developer (or also backend-developer) is the one who builds something through written code and usually doesn’t bother about the visual part inside a specific site/application.
Another aspect of back-end developers’ role is programming in languages like PHP, Java, Databases, etc.

Developers and designers usually work together as a team. The designer provides designs and images that will attract guests. Then the developer combines all the visuals into a website while making sure all its functionalities work perfectly.

That was a basic explanation of both terms and now is the time to dive deeper into the exact roles and responsibilities the web designers and web developers have.

What Is the Role of the Web Designer?

We will cover the design-only work here more. As stated earlier, in some places, web designers are also people who are front-end developers and write HTML and CSS. They have a completely different set of skills and tools. We acknowledge this, but we will keep our focus on the visual work more.

Web designers are often considered artists and their work – as a piece of digital art. Or at least that’s the basic profile. Their role is to transform ideas into creative visuals.

You can work with designers in regards to everything related to the site’s branding – logo, the color palette, the fonts and images, the overall visual experience.

If, however, you own an online shop, the web designer won’t build its functionality. Web designers are responsible for the visual and aesthetic part of a website.

They are responsible also for what users see on their screens – both desktop or mobile. Web designers build the layouts and can help with selecting the right colors, fonts, images or content graphics.

A really important part of their skillset is the knowledge of UX and UI. They can advise on how the navigation should work, how a homepage or a landing page has to be composed, so the users will stay on your website and possibly convert.

What Are the Different Designing Tools?

Web designers work with a wide range of designing tools. The Adobe Creative Suite is probably the most popular one. For example, our designers at DevriX use the following tools:

Other very valuable tools that help the web designers are ones that provide a good view of the designs and information about its elements – font, size, spacing, colors and more.

What Are the Essential Skills a Designer Must Have?

Design is not an easy job. It requires lots of creativity, inspiration and ability to understand what the clients require from them. It needs imagination and inventiveness which sometimes can be really hard.

Design requires a deep understanding of proportions, white space, balance, visual hierarchy and lots of experience in the digital medium as a creator and user.

The successful web designers have gained the following skills:

What Is the Role of the Web Developer?

The web developer builds all the website’s functionality. The developers write the code that provides all the instructions to the server, the browser and anything in between about how a website should perform. From clicking a button or opening a page to retrieving data with SQL query. All this is part of the developer’s daily schedule.

Developers are the technical guys. Depending on their roles in building the website and the languages they use, web developers can be split into three professional groups:

In the WordPress context, the front-end developer is working mainly with the site’s theme and is capable of building a custom one according to the client’s needs.

Back-end work is only visible to the website visitors as data – the text of a button, the headlines of posts as text and so on. If we think of a website button, the back-end work is responsible for the data it has, and not the way the button displays. Everything that makes that data reach the end user is the backend developer’s job- format it, parse it, modify it, store it.

Back-end developers are also responsible for handling the user management system- process of authenticating users and storing their data. They can build third party APIs which makes the user registration process easy.

For example, you enter a website and you want to subscribe to a newsletter. You need to leave your email address and your name. Both the designer and the front-end developer have created a form where you need to fill out your data. If this information needs to be saved and accessed at a later stage, it requires a database connection to the server where it would be stored. This is done by a back-end developer.

Some of the most common back-end languages are:

In the context of WordPress however, PHP and in parts SQL are what is most often in use. As a newer trend, JavaScript is also a language that is being utilized more often on the server side as well for managing and displaying content, provided from WordPress.

The full-stack developer refers to a developer who has knowledge in all parts of a website – front-end and back-end. However, full-stack developers rarely build absolutely everything although they are proficient in both front-end and back-end languages. It’s pretty hard to learn and be good at even one programming language. That’s why developers often choose one or two and focus on them.

Full-stack developers also have to choose where to specialize, but they have a good understanding and knowledge of all the steps to building a website.

Check out this podcast where DevriX’s CEO Mario Peshev and Cal Evans, known as the “Godfather of PHP” reflect and discuss what exactly is a full-stack developer.

What Are the Most Important Skills Web Developers Should Have?

All good developers, no matter which part of the programming they master, have the following common skillset: 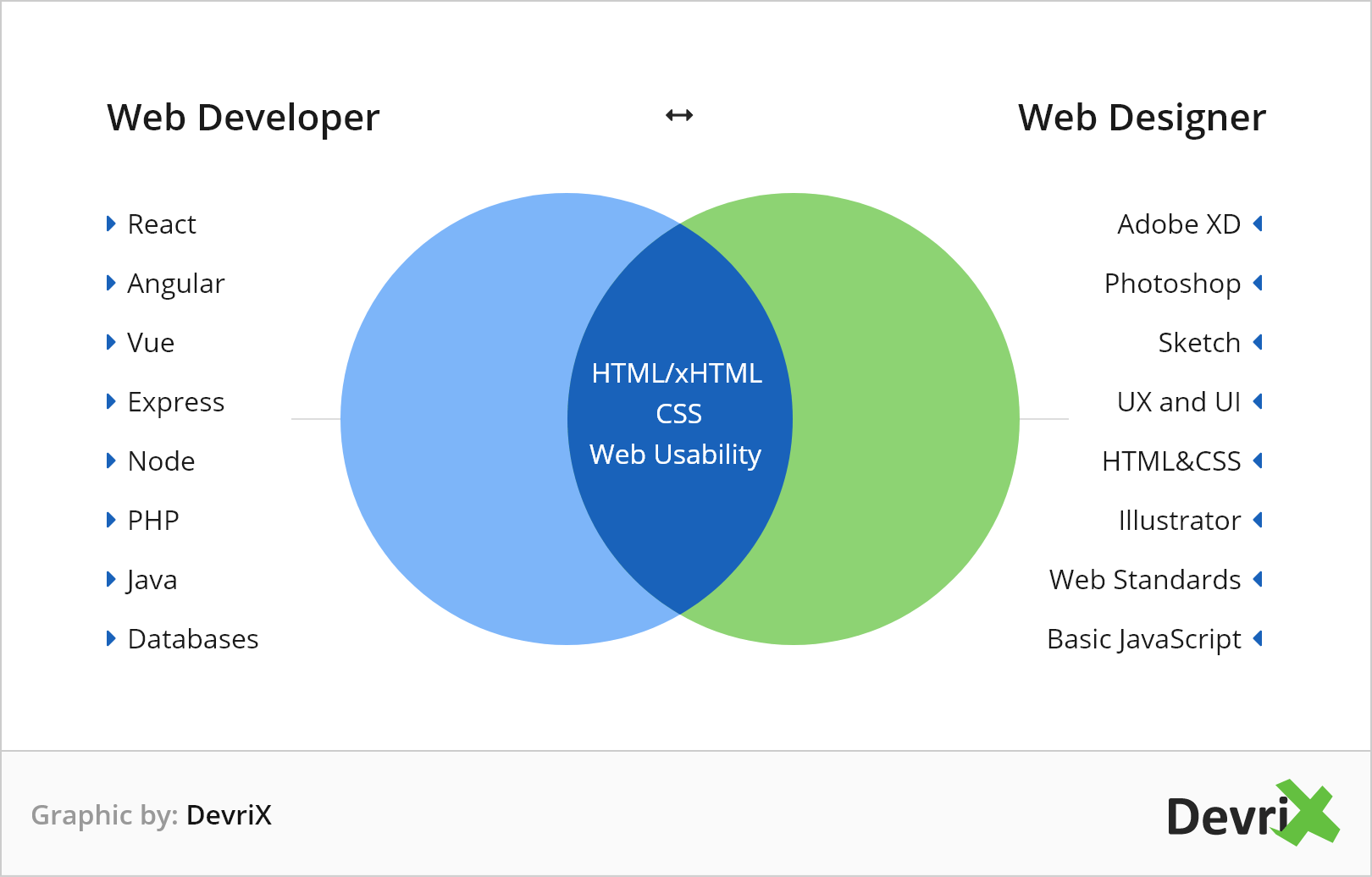 WordPress is the most popular content management system (CMS). It is possible to build any type of custom website and high-scale platform on it and there are numerous business models based on WordPress.

So far in the article we’ve spoken about WordPress core which developers install and work on top of its core, which is a free and open-source CMS where developers can build their own plugins, themes and code their own functions. You can find more about it on WordPress.org.

Whereas there is the hosting service WordPress.com, often a choice for non-professionals. We are drawing a line between both domains as there is common confusion.

WordPress.com is one among the countless hosting services providing one-click install where non-professionals can build their websites without dealing with software installation because all the functionalities are handled without coding.

There are simple settings in the theme and a few available plugins. However, there are quite a few limitations, especially for design. You don’t have much of a choice in themes nor can you develop one yourself.

How Do Professional Web Designers and Web Developers Use the WordPress CMS?

For professional designers and developers the possibilities are infinite. With WordPress, web developers can build their own plugins to add innovative functionalities to the main CMS. They have the freedom to be creative and provide solutions in order to build custom websites.

Front-end developers and designers also can create custom themes and add them to the WordPress repository which can be used by everyone. This is an example of how our Creative Lead challenged himself to submit to WordPress.org a theme in under 2 hours.

We have separate design and development departments at DevriX and each of them has different roles and responsibilities.

The front-end team and the web designers together are responsible for all visual parts of the websites we produce. They give creative ideas on how the websites can be built to ensure seamless user experience and be attractive to their customers. They also work in cooperation with the back-end developers who control the server commands and develop custom website functionalities.

The whole process is managed by project managers who plan the tasks of all internal teams and communicate with clients. Our main principles are teamwork, cooperation, and clear communication. Usually, different people and departments work together on one project in order to deliver the best solution to their clients.

As you can see, web designers and web developers have quite different roles. However, they need to work closely together as a team, especially on complex projects that have a lot of customization.

If you need a complex online business solution that generates millions of views, the quality of all design, front-end and back-end work is of utmost importance. Hiring a good professional agency is your best choice where a dedicated technical and design team will help you build and scale projects.

Hire a professional WordPress development company profiling in business growth for your next big challenge.