The new WordPress 4.7 “Vaughan” is out! You can grab your fresh copy directly from the official download page or update it from your Dashboard.

WordPress currently powers over 27% of the websites out there, so users’ expectations are high with every new major version. The new version introduces new innovative features and numerous improvements which we’ll cover below.

Every year around this time a new default theme is introduced. This year is no different.

The new version comes with Twenty Seventeen as the new default theme active right after installing WordPress for the first time. For the first time ever the default theme will be focused on business websites, rather than blogs – catering to the needs of business owners and corporations looking for a professional web content management solution.

To make things even better, the new default theme will introduce a few really cool features for users such as: a better flow when using a static page as your front page, expanding custom header images to include video, and dummy content for live previews. The complete list of functionalities is available on the official release blog post:

This is the feature that excites us the most. The REST API endpoints were finally merged to the WordPress Core (#38373). Now building RESTful applications with WordPress will be far easier. We’ll be able to create even more flexible websites and applications.

We’ve been using the REST API actively for projects like My Store Locator Plus, a massive location-oriented SaaS project built on top of an existing WordPress plugin. The REST API is used for data management, integrating with a custom React-driven dashboard, and as an intermediate layer accessible by different components within the plugin, and the application.

We’re pretty sure the WP API is going to be the future of WordPress, so we strongly suggest you to read more about the available features and ongoing plans for the API in the announcement post:

In the new version, we are seeing a ton of new features and updates for the Media Previews, User Languages, Editor Changes and many more core WordPress components!

Under The Hood Improvements

Together with all future improvements and updates for the users, there are a good number of improvements for developers. Let’s see some of them:

WordPress has supported custom page templates for more than 10 years and now with the new version developers will be able to create specific templates for Custom Post Types too. 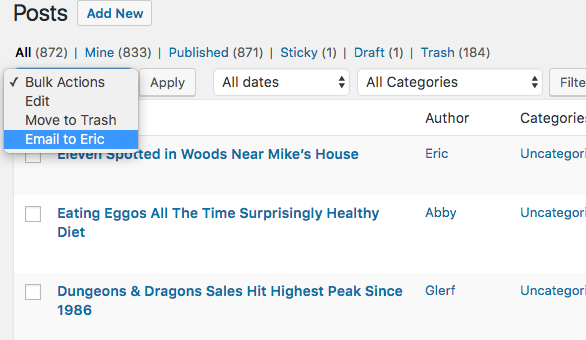 Of course, we have a good number of improvements for WordPress Multisite as well. There are 54 multisite focus changes at the moment. You can find the most significant updates in the official blog post as well:

And many more exiting updates that can be found on the official WordPress development blog – https://make.wordpress.org/core/tag/4-7/

Part of DevriX at WordCamp Sofia 2016

We are super exited to announce that DevriX has, not just one one, but two new core contributors with the first patches in this release. During the WordCamp Sofia 2016 Contributor day the technical team was actively participating and contributing back to WordPress. Kamena Dacheva, Mariyan Belchev, Moretti Georgiev, Alexander Dimitrov and I managed to submit a few patches to the Core. A few days later, Mariyan and Moretti got their first props and together with patches by Alex and me, DevriX now has 4 contributors in this release. Kamena’s patch was postponed for a future release, so we’ll be waiting for her props soon – fingers crossed Kami!

What is the most essential change in WordPress 4.7 that you’re excited about?