Have you ever browsed the internet and wondered how exactly some of the biggest media sites out there were created?

Often, the world’s top media outlets and brands use WordPress for their websites. There is a common misconception that the platform is not suitable for bigger brands; but, this is not true. WordPress has a market share of nearly 40% and powers an estimated 1.3 billion active websites, including those of household media names. WordPress is also a popular CMS, and in this market holds 60.8% of the total market share.

There are many reasons why these giant media outlets prefer using WordPress. It’s fast, secure, and hassle-free, and other services cannot compete with the amount of features and plug-ins offered. It also quickly becomes clear once you take a look at their extensive list of customers.

Let’s take a look at some of the top websites and media outlets created using WordPress, some of which might surprise you.

The New Yorker is a weekly feature magazine that incorporates journalism, commentary on current affairs, essays, and cartoons. Despite being based on the cultural lifestyle of New York, The New Yorker has garnered a wide international audience bolstered by their online presence.

Most famous for their illustrated covers showing current topics and events, The New Yorker has become a cornerstone of covering socio-political issues.

The New Yorker has been powered by WordPress since 2014. Since launching its online platform, the magazine has undergone a total digital reformation. This has included linking with social media and video platforms such as YouTube and Instagram. They’ve also recently introduced podcasts and mobile app options.

Their move to WordPress highlighted the growing need amongst magazines and newspapers to shift to online platforms with strong mobile potential. As with many industries, mobile use has taken off. WordPress has in the past taken substantial steps towards improving mobile responsiveness. It’s estimated that nowadays, 79% of all access to WordPress is done via mobile.

In recent years, print media has been decreasing in popularity as more people turn to the internet for their media needs. This decline is happening despite the fact that the number of magazine readers has increased over the past five years. The biggest problem is that the profits aren’t reflecting this growth. The truth is many of these media houses have to go online to stay relevant, and what better way to do so than creating a WordPress-based site?

The ease of creating access to online and mobile platforms is one of the reasons why WordPress is popular with bigger media houses. They also love the flexibility. With WordPress, there are enough options, plugins, and extensions for companies to create any type of website, with any features.

Another reason is the ease of integration with all media files. WordPress media makes it easy to embed videos, images, and more on websites. For The New Yorker, this allows them to embed podcasts, YouTube videos, and other media types into their articles. This enables them to create a more engaging experience for readers and drive up their traffic on multiple platforms. 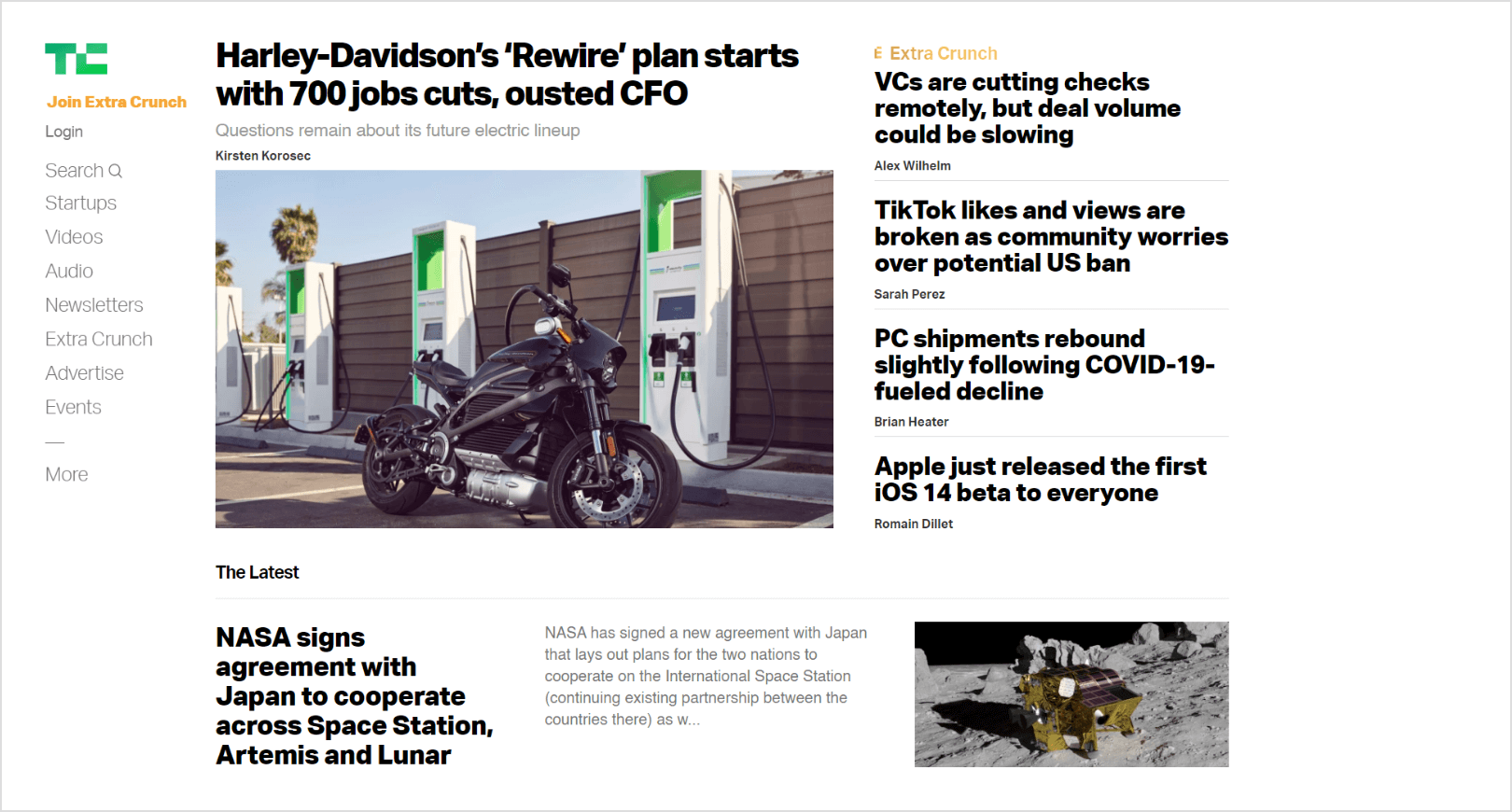 TechCrunch is another major media platform that has a website powered by WordPress. This online publisher is focused on the American tech industry. They report on tech news, emerging trends, and profile new businesses and products. Acquired by AOL in 2010 for $25 million, they have expanded to offer yearly tech conferences and launched other sites like Crunchbase.

TechCrunch made the leap to WordPress in 2018, creating what is known as a “headless setup”. This, in essence, means that the front and back-end of their website is separated, and they make use of WordPress primarily as a CMS or a blog.

They decided to make use of WordPress due to its ability to support high levels of traffic, editorial possibilities, resources, and other features while working with a smaller engineering team. Working with existing tech debt and other legacy issues proved to be too challenging to further pursue their old site. This caused them to build a new site from the ground up using WordPress instead.

“This makes a ton of sense for us, because our CMS is WordPress, and it handles content authoring, delivering, and caching very well,” stated Nicole Wilke, their Head of Product. “We wanted to build a future foundation that would be flexible enough to elegantly accommodate things we haven’t even thought of yet, but solid enough to stand the test of time.”

This one may surprise you: the company behind the happiest place on earth also has a website powered by WordPress. The Walt Disney Company is a multinational, mass media and entertainment powerhouse, creating leading entertainment and information. One of the world’s biggest media powerhouses, The Walt Disney Company has no shortage of resources. Still, they have chosen to create their website using WordPress.

Their reasoning for choosing WordPress was likely influenced by the CMS capabilities and the ability to add various types of media files.

The majority of these bigger brands use the WordPress VIP package to create their websites. WordPress VIP is a higher-end, managed hosting platform version of WordPress made for large-scale websites. As a result, this package is priced higher and has stricter coding standards. Unlike their free and easy to use version, this package is only suitable for certain types of companies, mostly enterprise-level.

Some of the other world-famous companies that use this version of WordPress include Facebook, Spotify, USA Today, amongst others. Similar to The New Yorker, The Walt Disney Company uses WordPress for its flexibility, and for its ability to add different media types to their content. This doesn’t apply to their own site alone, but also to the sites of their child-companies. Some of these companies include names like Marvel, Pixar, Lucasfilm, ABC, ESPN, and more. 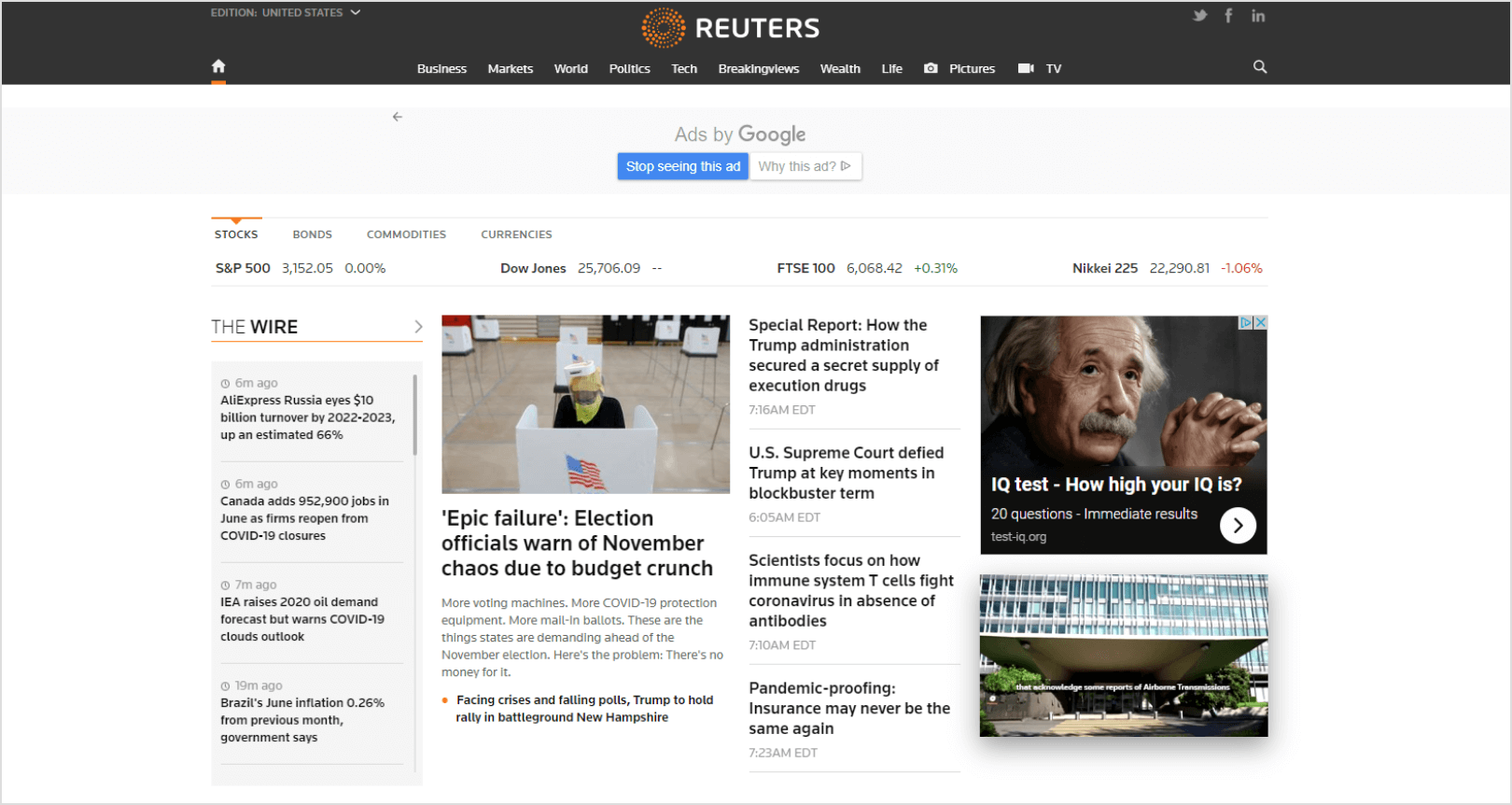 Another news and media outlet using WordPress is Reuters, the international news organization owned by Thomson Reuters. They are a business-focused media company, bringing in revenues of over twelve billion a year. The impact of Reuters on other online media houses cannot be underestimated – since 2014, almost every major news outlet in the world has subscribed to them. They are also regularly quoted in other, independent articles.

Reuters is available in 20 different languages and has reach in more than 90 countries around the world. It is estimated that on a daily basis, over a billion readers access their news via multiple different platforms. On average, they get 33 million visitors to their website every month.

According to their web communications team, it was easy to get the site set up using a custom theme. By leveraging WordPress infrastructure correctly, their team was also able to ensure user experience remained consistent, even during traffic spikes.

WordPress as a platform is able to handle high traffic rates without compromising a site, as long as the web-host and on-site optimizations are set up to. Using a modified theme, this media conglomerate has had a long journey with WordPress. Enterprise-level companies need more features than your usual B2C websites, such as having to create accommodation for localization, multiple languages, multiple microsites, and much more.

These companies don’t want to trust just any platform to provide these features, and out of the options available out there today, WordPress has been the most consistent, the most established and as a result, the most trustworthy.

Another global media company, but this one specializes in one type of media: music. Sony Music Entertainment is owned by the Sony Corporation of America, and earlier in 2020 they officially became the biggest publisher of music media in the world. Owning multiple major record labels, this company has offices in several countries across the globe.

Sony is also another company that makes use of WordPress in order to get their media website online. Sony Music represents popular music artists such as Celine Dion, Britney Spears, Justin Timberlake, Paul Simon, and Michael Jackson to name just a few examples.

Similar to some of the options listed above, Sony Music relies on WordPress in order to create audio files and playlists online for users to engage with. With a website that brings in over 33 million monthly visitors, it’s no surprise that they would choose WordPress as their solution.

According to their spokesperson: “This rise in traffic reflects Sony Music’s ongoing focus on building Web destinations that offer clean and easy navigation, compelling user experiences that connect fans and artists, and innovative direct-to-consumer features.”

Many big brands and companies make use of WordPress, not only due to usability but because it’s easy to scale as their business grows in the future. Enterprise-level companies like the ones listed above are always working on releasing new features, products, or services, and with a platform like WordPress, they can grow their platform however they need to with ease. When it comes to media and WordPress for business, there is almost nothing that isn’t possible.

WordPress has long outgrown it’s blogging routes, and with the platform holding a large portion of the market share, there is no doubt that we will see it evolve even more in the future. Without a shadow of a doubt, WordPress will be driven by demand for enterprise-level solutions. With benefits like scalability, security, reliability and much more, there is no reason why WordPress cannot be a choice for enterprise-sized companies.

The world’s biggest companies, with the resources and tech access that they have, choose WordPress to create their online presence, and that includes the major media companies that are household names. The reality is that there are no contenders out there that can provide what WordPress can, and the flexibility it offers makes it the ultimate CMS solution. These global companies are dispelling the myth that WordPress is not suitable for large-scale solutions.

Build and Scale Your Publishing Business

DevriX is a full-service WordPress development agency. We are not only offering web development services but rather an expert team of specialists that can advise you through every step of building your digital media platform.